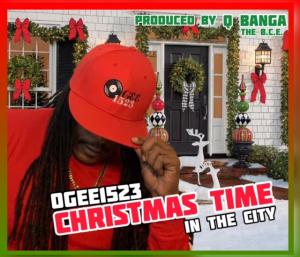 The Bronx rapper Ogee1523 releases, "Christmas Time in the City" The single celebrates all things Christmas and will get you into the spirit of the season!

This is the season to be jolly, get out your feelings, and love somebody! ”
— Ogee1523

BRONX, NEW YORK, UNITED STATES, November 24, 2022 /EINPresswire.com/ -- Bronx rapper Ogee1523 has released his new holiday song, "Christmas Time in the City." Produced by Q Banga the BCE, it hit all streaming platforms on Thanksgiving Day. A Christmas song with a message, Ogee1523 delivers a positive and uplifting message about spreading love and peace during the holiday season. It's a message that is needed now more than ever.

Christmas time in the city can be a magical experience (despite the hustle, bustle, and busy streets). The lights, the smells, the festive atmosphere - it all comes together to create a truly special time of year. And what better way to capture that feeling than through music? Ogee1523's song, "Christmas Time in the City," does just that, delivering a Christmas track that is both fresh and relevant. From rapping about the sights and sounds of the city to gift-giving and snow, the single does not miss a beat on the need to be joyful this time of year. It's a Christmas song that’s needed in the hip-hop culture. The song features Ogee1523's signature flow and catchy hooks that will have you singing along in no time. But it's not just the lyrics that make this song a holiday treat; the production is top-notch, with a catchy beat and infectious hook that will get even the Grinchiest listener dancing along. So, crank up the volume and get ready to celebrate Christmas in style.

For over ten years, the Bronx artist has been making music and recently released his album "Never Too Late" early this year. His hit song "Get 'Em Up (Birthday Vibe)," featuring Fatman Scoop, is playing on national radio stations. His music reflects his experiences as a young black man growing up in the Bronx when rap was fun. He wants to bring that same fun back to music today. For him, it's not about fame or money but the love of music and connecting with people through it. Ogee1523 says he wanted to release the song on Thanksgiving day to kick off the holiday season. So if you're looking for a new Christmas song to add to your playlist, look no further than his "Christmas Time in the City." It's sure to become a holiday classic.

Listen to "Christmas Time in the City" now! It’s available on all streaming platforms, so crank it up loud while you decorate your tree or wrap those presents!

ABOUT OGEE1523
OGEE1523 is a Harlem-born and Bronx-raised rap pioneer artist. His commitment, energy, and passion are his music career has seen him become the proud owner of the impressive “Never 2 Late” album, collaborating with Grammy award winner FatMan Scoop in his song “GET EM UP (Birthday Vibe).” Over the years, Ogee has earned many revolutionary titles and roles, mainly as a father, grandfather, mentor, and role model to the young. Ogee is the mentor to his three sons, Ty-Trackz, a producer, J-Quest, a rapper; and Oun-P, an unstoppable battle rapper. He collaborated with his sons Ty-Trackz and Oun-P in his song "A Father & 2 Sons." The father of four (three boys and one girl), and grandfather to ten, have constantly believed in himself and his talent to make a difference, particularly in the rap industry. He boasts of five skills in all five elements of the hip-hop culture: graffiti, break dancing, beatbox, DJing, and rapping. Through his music, Ogee captures the ears of the young, the middle-aged, and the old, dispersing the pleasure of hip-hop music and spreading positive vibes. His chart-climbing single and video "More Weed” and his latest 2021 New Year's hit, "GET EM UP," featuring Fatman Scoop.

For inquiries or corrections to Press Releases, please reach out to EIN Presswire.
✕
× Close Ad